The new presidential limo is complete with tear gas  cannon and a shotgun.  I’m not sure that will be effective against the liberal snowflakes that may have emptied their tear ducts with all the crying they do.  Why not load the cannon with jobs.  That will get those liberals running for the hills. 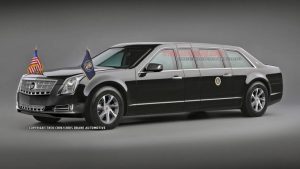 According to Autoweek, however, the limo will inherit most of its traits — including its size and general design — from previous presidential limos. The “big changes” will reportedly center on the limo’s communications system. Perhaps it will include access to gigabit internet?

Granted, Autoweek speculated that it was “unlikely to be transformed into a mobile office” featuring “multiple tables, screens and office equipment,” since presidents do not typically spend that much time in the limo.

Of course, presidents haven’t typically been billionaire businessmen, either.


The only drawback to the limo was that it would reportedly cost $1.5 million, which in fairness was a small price to pay to both keep the most important man in the world safe and protected and also arm him with the weapons needed to keep back haters and miscreants.