Bob Woodward who is better known for battling lying presidents is now taking on corrupt Intel bosses to the point that he is even defending Donald Trump.  Woodward made his comments on “Fox News Sunday” because mainstream media would never allow it. 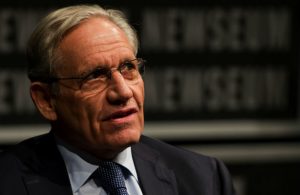 Here is what he had to say about the bogus dossier:

“In Trump’s mind, he knows the old adage, ‘once a C.I.A. man, always a C.I.A. man,’ and no one came out and said those people shouldn’t be saying those things.  So act two is the briefing when this dossier is put out.”

“I’ve lived in this world for 45 years where you get things and people make allegations.  That is a garbage document.”

Woodward emphatically stated the president-elect is:

“right to be upset about that, and I think if you look at the real chronology and the nature of the battle here, those intelligence chiefs who were the best we’ve had, who were terrific and have done great work — they made a mistake here.”

“When people make a mistake, they should apologize.”


Previous Notorious Octomom Claims She is Too Beautiful to Work

Next 13 Marine Corp Kids Get Cancer, Wives Reveal Alarming Truth About Where They've Been Staying[Watch]