The Barnum and Bailey Circus is closing after 146 years, done in by lagging attendance and legal hassles with communist groups like PETA who believe a cockroach is the same as a baby girl.  In the end it was too much. 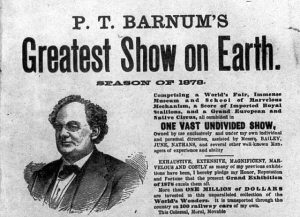 PETA is taking credit for the closure:

As of May, the saddest show on earth for wild animals will end. Thirty-six years of PETA protests, of documenting animals left to die, beaten animals, and much more, has reduced attendance to the point of no return. All other animal circuses, roadside zoos, and wild animal exhibitors, including marine amusement parks like SeaWorld and the Miami Seaquarium, must take note: society has changed, eyes have been opened.
Although the circus admits that they have been hurt by liberals, they said that the rising costs for operating and low attendance were the nail in the coffin.

From The Daily Caller:

“There isn’t any one thing,” said Kenneth Feld, chairman and CEO of Feld Entertainment. “This has been a very difficult decision for me and for the entire family.”

The circus will continue to perform 30 more shows until May. The final show will be in Uniondale, New York, at the Nassau County Coliseum on May 21.

Former Baywatch star Pamela Anderson, a celebrity PETA activist, was quick to tweet her joy at the news of the circus’s demise.  “It’s over,” she wrote.

President-elect Donald Trump, though not tweeting about the news, has registered his disappointment when the circus retired its elephant act.