Evidently, Judge Jeanine Pirro is no fan of Rosie O’Donnell, but then again who is?  The Judge points out how totally insane O’Donnell’s idea about Martial Law.  It will be four well spent minutes to listen to what Judge Jeanine has to say. 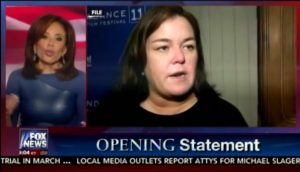 And as for those Hollywood leftists in need of a lobotomy, like Rosie O’Donnell. They are straight up Communists. Rosie supports imposing Martial Law, delaying the Inauguration until Trump is “cleared of all charges.” Rosie, I know you. I don’t have a problem with you. But, martial law? Are you nuts? Do you eve know what martial law is? It’s when the military takes over when we are taken over when we are invaded and are at war. And by the way Trump isn’t charged with anything.