Bernie Sanders and Elizabeth Warren (Honest Injun) are up in arms over Trump’s nomination of Steven Mnuchin to the Secretary of the Treasury.  They both blame him for the collapse of IndyMac Bank.  Warren claims that he threw people out into the streets.  Yeah, that’s true.  You quit paying your mortgage and any bank will toss you out.  But the truth is Chuck Schumer destroyed the bank. 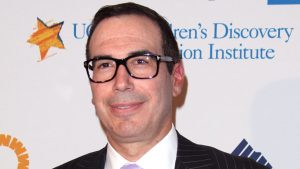 While it’s true IndyMac had problems mostly from making too many questionable mortgages, that is not Mnuchin’s fault.  He bought the bank and was cleaning up it’s mess, something that all bigger banks do.  They make money and create a stable environment for depositors and borrowers.  When you quit receiving mortgage payments, you evict so that the property can be sold.  Often, the bank loses money, but they don’t make a windfall profit as they have to give the evicted homeowner any money received above what they owed.  That did not bring down the bank.

Chuck Schumer destroyed the bank, devastating borrowers and some depositors alike.  On  June 26, 2008, Schumer sent a letter to regulators expressing his concerns about the financial shape of IndyMac bank in California.  That wasn’t bad.  It might have led to an investigation into the bank and they could resolve any problems to assure that customers of the bank were adequately protected.

But, Schumer gave a copy of the letter to the media which started a run on the bank, which over the next 11 days saw 1.3 billion drawn out of the bank.  As you know, the bank never has the funds to pay off all creditors immediately because they loan out the majority of the money because that’s how they make a profit.  It was the run on the bank that destroyed it, not evicting people for nonpayment.