Cara Brookins wanted a nice home for her children but having been divorced twice, she had no money to buy a home.  So she decided to build her own with the help of her kids and she was able to do it using only YouTube tutorials. 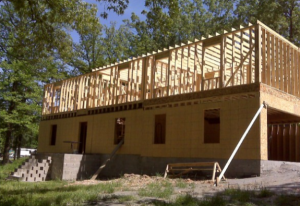 Cara Brookins, 45, of Little Rock, Arkansas, explained that when she and her children started on the project in 2008, they were looking for a way to move on from a traumatic past.

“My kids and I had been through a really tough domestic violence situation,” she told InsideEdition.com. “When we left, we were pretty beaten down, destroyed. We needed something big, and we needed a place to live. We needed some kind of action after so long feeling powerless.”

For the Brookins family, that project was building a house.

The one catch was that none of them, including her four kids — aged 2, 11, 15 and 17 at the time — had any experience in a do-it-yourself project of that magnitude.

“Those really early days felt the most hopeless to me,” she admitted. “I don’t think there was any part we felt confident we could finish.”

But they took it each day at a time.

Brookins started by taking out a construction loan from the bank for $130,000 to go toward supplies, and purchasing an empty, 1-acre plot of land for $20,000.

Then the family took to the internet, looking up instructions on Google and memorizing YouTube tutorials on the many steps involved in putting together a 3,500-square-foot house with five bedrooms and a three-car garage.

Next General Mattis Asked to Make the Call On Sidearms