Turkish police have arrested the ISIS terrorist who shot up the Istanbul nightclub and he appears a little worse for wear.  His face appears to be bruised and his shirt is covered in blood. 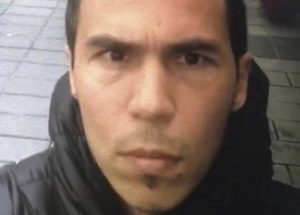 The ISIS attacker responsible for a mass shooting at an Istanbul nightclub New Year’s day was caught in the city’s Esenyurt district Tuesday, according to Turkish media reports, and appears to have paid a price for his crimes already.

The unnamed suspect appears to have been beaten severely by Turkish special police forces. Pictures of the captured suspect show him with severe bruises and cuts, and a shirt covered in blood. Other pictures show another man face-down on the ground, hands cuffed behind his back with a Turkish officer’s foot on his head. Police also reportedly detained three women.

It took Turkish police more than two weeks to find the suspect, who just so happened to be in the same city in which he perpetrated his crime. The Turkish government released a selfie picture of the suspect shortly after the attack on the Reina nightclub.


The police were able to use surveillance video from that night to identify the gunman but it took them two weeks to locate him.


Previous Have You Ever Wondered Why Maxine Waters Isn't in MENSA..Here's Why [VIDEO]