A seven year old British girl is wowing the internet with her video of impersonating Taylor Swift singing You Belong to Me.  In the past, she also mimicked Selena Gomez.  Xiamara Vigor has become a big star on Philippines TV. 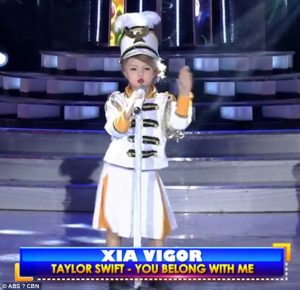 Xiamara Vigor sent the audience wild with excitement as her clothes were torn off during her pitch-perfect version of Swift’s 2008 hit You Belong With Me.

Half-way through the two-minute routine, viewed more than a million times on YouTube, she has her uniform ripped away to reveal a black dress before untying her blonde wig and tossing it around. Adult fans in the audience are seen screaming in delight while clutching banners emblazoned with ‘Xia’.


Xia also stars as a princess in a hit family sitcom and moved from Devon to Asia as a toddler with her British father Alan and Filipino mother Christy, who met online and married 11 years ago.

Mr Vigor told MailOnline today: ‘I am incredibly proud. She performs amazingly and she’s become a really big star on TV here in the Philippines’.


Previous BLM Post Trump Resistance Manual..Try To Keep Your Crayons Within the Lines

Next Putin Says Russia Has the Best Prostitutes, But Trump Didn't Bang Them