I have to say, this was one of my kids favorite teethers along with millions of others and it still will be. Unfortunately, these cute toys are NOT MADE FOR WATER submersion. The toy is made of 100 percent natural rubber, so the cleaning instructions have to be carefully respected. The best way to clean your toy is to wipe down with a wet cloth to ensure that no water gets in the small hole in the back. If you have a baby that is a heavy drooler, this could still pose a problem. The company has responded and ask that parents follow the cleaning instructions located in the box.

A NJ mom noticed a funky smell coming from the squeaker hole and decided to cut it open to investigate further.

mother who found black mould in her son’s Sophie the Giraffe teething toy has warned other parents to be careful when letting their children chew on the best-selling toy.

Dana Chianese, a pediatric dentist from New Jersey, said she was shocked to discover the inside of the rubber toy – often favoured by the offspring of A-list celebrities – covered in black mould.

A ‘musty’ smell alerted Chianese to the problem and she decided to cut open the toy to find the source of the unpleasant aroma – only to be horrified at what she saw. 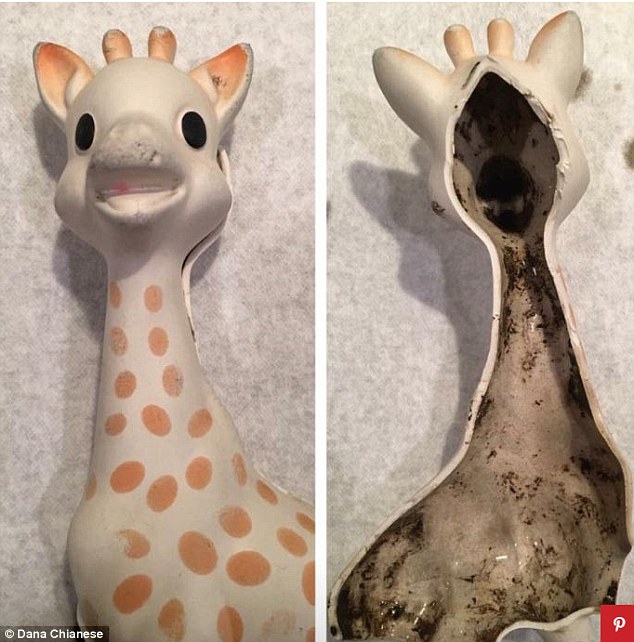 Dana Chianese, a pediatric dentist from New Jersey, posted shocking images of her son’s teething toy after cutting it open when she’d noticed it smelt strange

The dentist told Good Housekeeping that she regularly recommends the product for teething children but couldn’t believe that mould had been growing in a toy that is designed to be chewed upon.

She said: ‘I decided to cut into Sophie out of curiosity and discovered a science experiment living inside. Smelly, ugly mold living in my infant’s favorite chew toy!

The toy has been a favourite with parents – and gift buyers – for generations and is made of 100 per cent natural latex from the Hevea tree, making it ideal for children to bite on to ease the pain of teeth coming through.

Like a dog’s toy, it has an airhole in the bottom of the toy to let children squeeze it.

The toy has regularly been seen being used by celebrities, with Miranda Kerr and Orlando Bloom’s son Flynn a fan when he was younger. Other celebrity Sophie converts include Kate Hudson, Maggie Gyllenhaal Nicole Richie, Isla Fisher and Amy Adams.

Created by French company Vulli, it was first brought to the market in 1961 and is often recommended by health professionals for its easy-to-grasp shape. 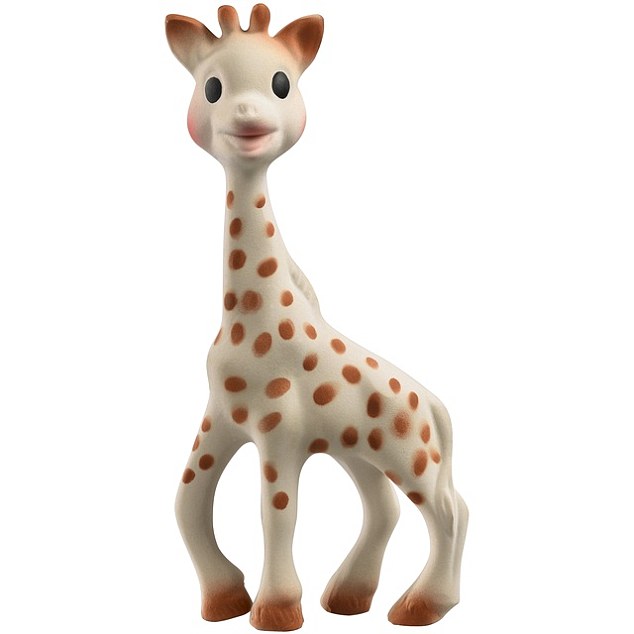 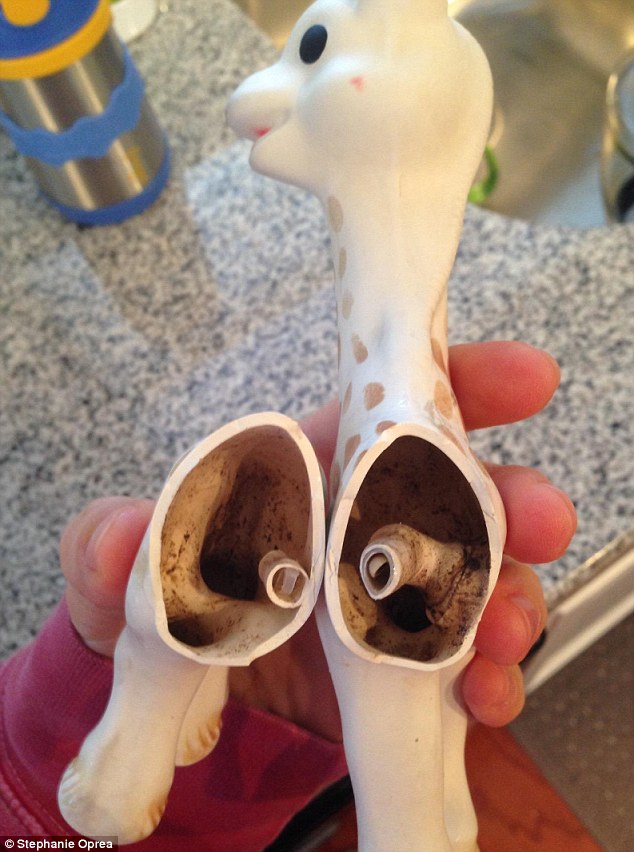 Another owner of the giraffe, Stephanie Oprea, last year issued a similar warning against the toy after finding the inside of her daughter’s one covered in growths

On an Amazon review, she wrote: ‘Beware! If you have a drooly baby, moisture will get in the hole and you’ll end up with mold! We’ve had ours for two years and the entire inside is coated with black mold!

Elsewhere, another owner of the toy, thought to be from the US, posted a similar review after she chopped off the legs of the toy to stop her daughter pushing them too far into her mouth.

She wrote: ‘I thought we’d be smart and cut the legs, so they weren’t so long. Well, when we chopped the legs, it revealed a lot of mold growing inside!! Needless to say, Sophie is now residing at her new home at the dump. 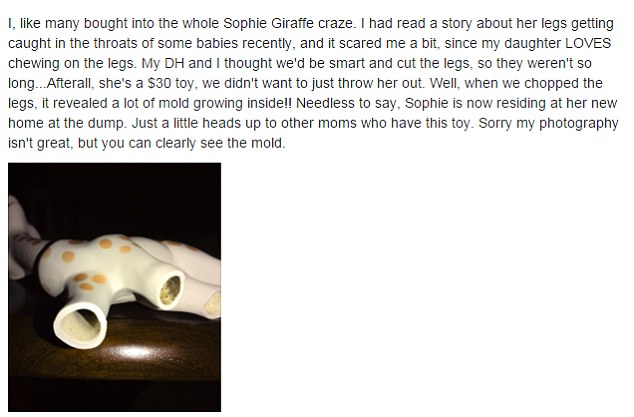 Previous What A Surprise...Obama Heading On A Post-Presidency Vacation At The End Of The Week [VIDEO]

Next The Best Poem Of 2017 Thus Far: "Twas the Night Before the Inauguration