A police officer from Smyrna, Georgia, grabbed a box of doughnuts from Krispy Kreme and was none too pleased with what he found to go along with his order. The incident happened one week ago and Krispy Kreme has already issued an apology.

Police are using the word “egregious” to describe what happened.

“While it is clear this behavior was egregious in nature, Krispy Kreme did take responsibility for the incident,” Smyrna Police Department spokesman Louis Defense said in a statement.

Krispy Kreme sent an apology letter to the police department and their corporates spokesperson, Sarah Roof, stated that the company moved quickly to investigate and take the appropriate actions. It is unclear at this time what specific actions were taken.

“As a company, we value both our customers and employees and respect all viewpoints. The experience did not live up to these high standards we set for ourselves,” Roof said.


Krispy Kreme plans to “train the staff at all of our U.S. shops to reinforce mutual respect between employees and customers.”

The company also released the following on their Facebook page:


We have been informed that an officer for the Smyrna, GA (US) policedepartment received packaging today at one of our shops that contained writing on it. As a company, we value every customer and are committed to upholding our brand standards and delivering a superior customer experience. We have opened an investigation into the matter and will take whatever steps necessary to ensure the values of our company are upheld.

A photo of the controversial box of doughnuts has been released to the public. Take a look: 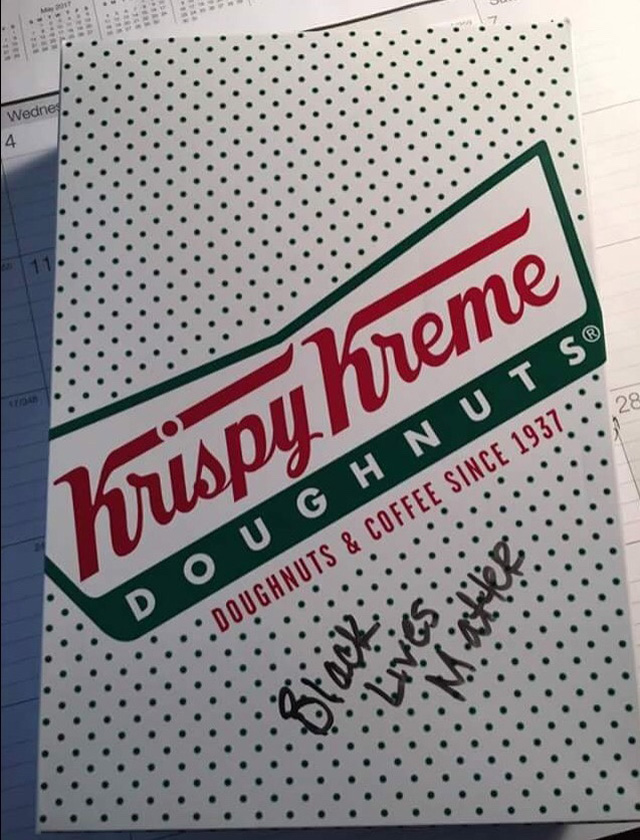 What do you think should be done to the employee responsible for this?