A spear fisherman in Australia was diving, looking for prey, when he almost ended up on the menu himself.  He had a camera mounted on his person and you can see the shark heading straight for him. 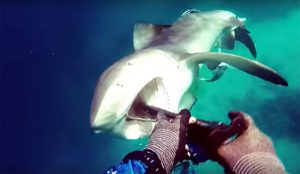 In this video posted on Youtube by user Liquid Vision, a spearfisherman in North Queensland, Australia, narrowly escapes an attack mid dive from a seemingly unprovoked bull shark, proving once again that Australia’s wildlife is SCARY.

Thankfully, the fisherman acted quickly by stopping the shark with his spear before it made him its next meal.

Our fear of sharks, luckily like that fisherman, is alive and well.