Taliban Commander Kamal Khan was killed this week when a bomb he was working on went off, destroying his entire house, killing him and four sons.  The Taliban has been in hiding and awaiting the opportunity to reemerge.  Recently, Obama ordered more troops to the  Helmand Province as the Taliban has started new attacks on the Afghan army. 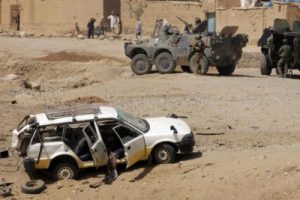 Khan was considered the top bombmaker that the Taliban had and he was most well known for roadside IEDs which have been a major problem for US and Afghan soldiers.

From The US Herald:

The Taliban ruled Afghanistan from 1996 to 2001, enforcing its own rigid interpretation of Islamic sharia law imposing strict prohibitions against activities that had been legal prior to its takeover, such as eating pork, drinking alcohol, listening to music, watching television, painting or owning paintings or photography.

Severe dress codes for men – forbidding shaving and requiring head coverings – and women, including head-to-toe covering, as well as enforcement of “morality” laws involving chastity and adultery accompanied ruthless treatment of civilians, such as massacres, denying emergency food drops by the United Nations, as well as the destruction of homes and the burning of arable land.


President Obama has ordered hundreds of Marines back into the Helmand Province to assist Afghani forces dealing with the recent resurgence of the Taliban and its aggressive campaign against several major cities.

Taliban leaders have said they would “welcome the challenge of dealing with the Americans.”