Reports out of Washington says that Donald Trump plans to sign an Executive Order defunding Planned Parenthood this weekend.  This is a major blow to democrats who depend on huge kickbacks to help fund their campaigns.  In 2016 PP received over half a billion from the taxpayers and spent over 14 million trying to get democrats elected. 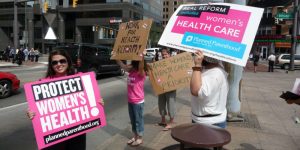 Since when did pregnancy become a disease?

By cutting off Planned Parenthood, President Trump will save us over 4 billion dollars in his eight years.

The policy could be re-established as early as Sunday, according to a report from Foreign Policy, the 43rd anniversary of the Supreme Court decision on Roe v. Wade.

The Republican policy, also known as the “global gag rule,” was put in place by former President Ronald Reagan’s administration in 1984 in Mexico City. Ever since, Republican and Democratic presidents have been playing a game of policy ping-pong with the mandate.

So reports that the new president may reinstate the policy are not surprising. Regardless, Sen. Jeanne Shaheen (D-N.H.) told Foreign Policy that she is prepared to fight Trump on the matter through legislative procedures, should he reinstate the rule through executive order. Any legislation to overturn the president’s policy decision on this matter would need to pass through the Republican-controlled House and Senate, and would even then likely face a veto from Trump.