The snowflake liberals actually confronted the Bikers For Trump twice but that was 2 times too many for the snowflakes.  You don’t build up a lot of muscles sucking your thumb or hugging trees or even cashing your check from George Soros. 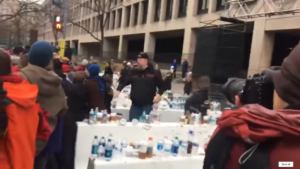 In the first one, the protesters were trying to prevent Trump supporters from attending various functions.  How many snowflakes does it take to stop a biker?

In the second a guy tries to pick a fight with one of the bikers helping Trump supporters get through the snowflakes.

Somebody better warn the #HellsAngels. These people mean business…. 😂😂😂 pic.twitter.com/NCqk6kLHfR

Look you are an angry bitter liberal so you accuse people of racism, call names. Have a great 4 years. Enjoy hugging your teddy bear. Sean https://t.co/nuj5CAl9DW

Can I send you some crayons? A coloring book, legos, or some Hot Cocoa?? https://t.co/uWKdAVpjmN

Snowflakes, if you value your health, I would suggest to stay away from Bikers for Trump, If I were You … pic.twitter.com/uCmuLZg4VZ

These are the snowflakes that are threatening to disrupt the innaguration. Anyone frightened? Nah. #TrumpInaugural pic.twitter.com/NQgNz9pAEF

It’s over snowflakes… adults are back in charge. #Inauguration pic.twitter.com/owuwDi2nRz

Next Do You Agree These Are The 5 Most Irritating Bands/Musicians? [VIDEOS]