In the last assault during the Obama years, the US staged bombing raids on two Libyan ISIS training camps.  One hundred and eight guided bombs were dropped, scattering the terrorists and trainees.  To finish off the attack, the flushed out terrorists were then hit by Hellfire missiles. 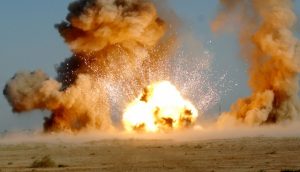 A pair of B-2 “stealth” bombers blasted two ISIS training camps in Libya on Wednesday evening, dropping 108 precision-guided bombs and sending jihadists scattering — many of whom were then “cleaned up” by drone-launched hellfire missiles, U.S. defense officials told Fox News.

Many of the fighters were “actively plotting operations in Europe,” Defense Secretary Ash Carter said at a news conference Thursday.

U.S. drones “cleaned up” the operation by launching hellfire missiles that killed a several of ISIS fighters trying to run to safety.

From The New York Times:

“We had 100 terrorists training,” said Peter Cook, the Pentagon press secretary. “That was a risk we could not accept.”

To buttress its assertions, the Pentagon released surveillance video of the militants at one of the camps unloading rocket-propelled grenades and shells from a truck.


The B-2 bombers dropped more than 100 satellite-guided bombs and were chosen in part for their ability to loiter over the target area, Pentagon officials say. After the B-2s dropped their bombs, the Reaper drones followed up with their strikes.