I have seen this happen once before.  It was a rainy day at Giants Stadium, when my friends and I had our blankets spread on top of the tarps, protecting the football field. 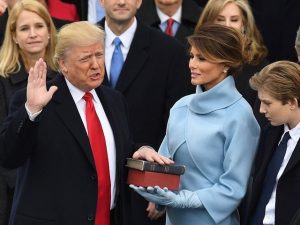 We sat through a couple of warm up bands as our blankets became soaked because the tarps were preventing the water from draining.  Just as the featured band hit the stage, the sky opened up and the sun engulfed the field.  Can you guess who that band was?  The Beach Boys.

Today, Donald Trump was sworn into office on a dark and rainy day.  But as he reached his spot to be sworn in, the sky opened up and the sun burst open the swearing in.  A sign from God?  You decide.