During the campaign, Hillary had what was called a “handler, who was spotted with some kind of syringe and aided her a couple of times when she appeared to be dazed and confused.  He sat behind her at the inauguration. 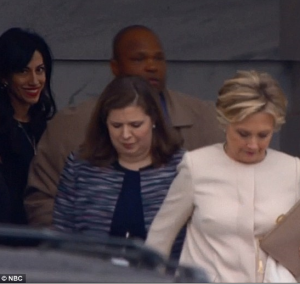 All during her campaign he appeared he was spotted keeping close by.  The women between them also looks like the one who aided her on 9/11.  This could indicate that her health is as poor as some seemed to believe.  When Hillary was on stage and began acting dazed and confused, the handler placed his hand on her back and told her to keep talking.

Some suggested she may have brain damage but being a liberal, it’s so hard to tell.

She may have lied about her health during the campaign.  Lying comes easy to a Clinton.