There has been a mass shooting at the Rolling Oaks Mall in San Antonio, Texas.  There is 1 dead and six injured.  A man tried to intervene in a robbery at the mall and he was shoot and killed.  A second man who was also armed shot one of the would be robbers, who had to be taken to the hospital.  The second gunman is still at large and police do not know if he is still in the mall or not. 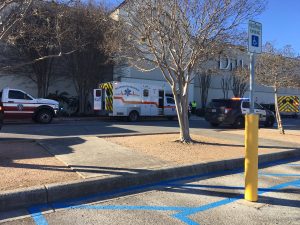 1 dead, 6 injured after a shooting at a San Antonio mall, Mayor’s Office tells @ABC. 1 suspect is in custody, 1 is still at large.

After the gunman shot the man who intervened, he ran through the mall and shot six more people.

No more details are known at this time.

Allyson Hamby’s daughter is still inside. She just showed me a text from her daughter which read “I’m scared” pic.twitter.com/KkvGp7cjzr

BREAKING: Reports of shooting incident at Rolling Oaks Mall. We have a reporter headed to scene and will have updates


Previous Samantha Sepulveda, New York Cop, Is So Hot That Criminals Literally Freeze At Her Beauty

Next Obama's Lack of Transparency Responsible For Trump's Media Wars