A young Hispanic man was being interviewed outside the National Press Club, where the DeplorableBall was held, when a group of racist liberals attacked him right on camera.  Moments later he was attacked again. 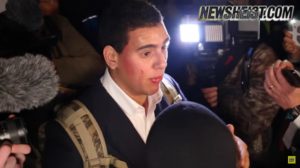 The assaults were made by liberals who are members of the KKK, hilariously holding a sign that said:  ‘Stop Hate’, ‘Stop Fascism’.  During the last part of the interview, his lip was bleeding and his face showed bruises from the beating from the kkk.