It has become commonplace for deranged democrats to call for Trump’s assassination.  For one burlesque dancer it came with a huge price.. 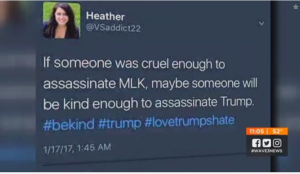 Since she posted that she has been paying a price.  She was reemed out by every Trump supporter in America until she had to close her social media down.  Then the Va Va Vixens fired her because they didn’t want to be associated with a lunatic.

“Please, know that we, at Va Va Vixens, do not condone the behavior of Heather Lowrey.”.

“She was dismissed the moment we were informed of this incident. We have a zero tolerance policy for such. It’s no secret that we are in the midst of a divided nation. With so much hate and anger in the world, our hope is to be a sanctuary that welcomes all walks of life with open arms. We do not condone hate by any party and will not partake in it. We in no way support negative behavior or malicious intent from anyone.”

Then came an even higher price when she was approached by the Secret Service and questioned.  She is now waiting to find out if she will be prosecuted.  Sooner or later they have to start tossing these morons into prison to force people to stop making threats against the president.

If these liberals actually were true to their motto and really tried to “be kind” to everyone then we wouldn’t have to make consequences like this for some crazed lunatic.

Even more concerning is the idea that, at some point, some liberal even more insane than the ones running their mouths, calling for Trump’s assassination, will actually act on that demand try to carry out one of these insane plans.

This is why people like Heather Lowrey need to be punished for calling for such violence and drastic action. It’s not just the everyday crazies like Lowrey. High profile people like Madonna, who just demanded that someone bomb the White House, need to be punished for trying to incite such radical acts from the public. Sooner or later some angry crazy liberal is going to act on these dangerous calls to action and then we’re going to have a real problem on our hands.