The liberals are right about one thing.  It’s a dangerous period in this country.  With all the violent liberals around, no decent human being is safe.  White liberals have taken the Trump presidency as an insult.  They have come up with dozens of reasons they lost but the real reason is much simpler.  Donald Trump outworked Hillary Clinton.  She would take breaks lasting up to five days while Donald Trump was making dozens of stops. 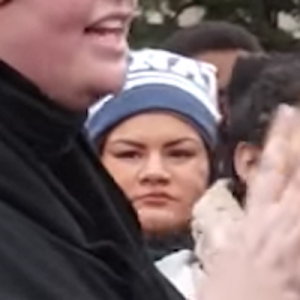 Police are looking for the woman in the picture right above.  The “peaceful demonstrators” began chanting “Love trumps Hate”.  Right after that a liberal scuzbucket decided to show her love by using her lighter to set a young girl’s hair on fire because her father was a Trump supporter.  The fire was put out quickly and the little girl suffered no great physical harm, but I imagine it left her with a bad doo.

Meanwhile at a Women’s march in Edmonton, Ontario, a man punched a woman in the face because she refused to believe as he does.

We caught him, thanks to the Internet. Dion Bews, turn yourself into police & get ready for a massive civil lawsuit. https://t.co/x6Iorrg99t https://t.co/0skvcTCgGk