Two prisoners who disemboweled an inmate so they could eat his liver were told by a judge today that they are likely to spend the rest of their lives in jail.

They lured child rapist Mitchell Harrison, 23, into Mann’s cell where he was pinned down by Parr, Newcastle Crown Court heard.

Mann, described by a psychiatrist as “a remorseless, callous psychopath” who “harbours cannibalistic urges” and is “one of the most dangerous men in the criminal justice system” cut his neck with a scalpel made from plastic cutlery and a razor blade.

He also stabbed him in the eye with a pen and, after he was dead, cut his stomach open.

He and Parr had planned to cut Harrison’s liver in half and share it, but could not bring themselves to do it, the court heard. 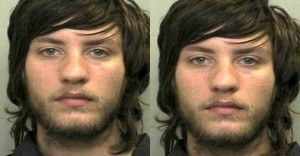 Harrison, who was serving an indeterminate sentence for raping a 13-year-old girl in Kendal, Cumbria, in 2009, was found dead by prison guards as they released inmates from their cells on the morning of October 1 2011.

“He told prison officer Graham in a calm manner that there was a dead body in the cell,” he said.

Officers found Harrison lying on the bed, surrounded by blood.

“When asked why they did this, both of them shrugged their shoulders,” Mr Smith said.

“Nathan Mann said he had chosen the deceased because he was arrogant and they didn’t like him.

“He said they had planned it for a while and just fancied doing it.

“There was nothing to suggest a fight or even a scuffle had taken place.”

Mann said he tried to snap Harrison’s neck before proceeding with the horrific attack, the court heard.

Both men were arrested and taken to Durham police station, where Mann admitted he and Parr had shared fantasies about killing.

“Nathan Mann told police that, after he had come to know his co-accused, he told Parr he had thoughts about killing people and that Parr had told him he thought the same way,” Mr Smith said.

“They intended to remove his liver and cut it in half so they could both eat it.”

But they were too shocked by the injuries they had inflicted to go through with it, he added.

In a note to prison staff found after the killing, Mann said if he was not taken to solitary confinement he would “do the most goriest killing they had ever seen”.

Mr Smith added: “There is evidence he expressed desire to kill a fellow prisoner or prisoners during the assessment by the psychiatric team.”

He said Parr had also expressed “fantasies” about beheading other prisoners and cutting out their stomachs.

Psychiatrist Dr John Kent, who assessed Mann, said he was “a classic, cold, callous and what I’d describe as homicidal psychopath” who had “compulsive homicidal urges”.

He said Mann has a psychopathic disorder which “substantially impaired the defendant’s responsibility for his actions”.

At the time of the killing, Mann was serving life with a minimum term of 24 years after he climbed through the window of a nursing home in Leicestershire in 2007 and killed two vulnerable women, aged 72 and 56, who shared a room.

One died of extensive fractures to the skull, consistent with having been punched to death, and the other was suffocated.

He later told friends he was “the lowest of the low and they would hate him forever”, the court heard, and handed himself to police.

During psychiatric assessments he claimed he could not remember the killing.

Parr was sentenced to life at Newcastle Crown Court in 2003 for attempted murder after he tried to smother a patient at a hospital in which he was being treated.

At today’s hearing, Ben Nolan QC, mitigating for Parr, said the defendant “knew what he had done and owned up to it in very plain terms” after attacking Harrison.

Michael Magarian QC, for Mann, said he “takes full responsibility” and although there was talk of eating Harrison’s liver, no cannibalism took place. The Crown accepted his plea of manslaughter on the grounds of diminished responsibility.

Judge Justice Openshaw said both men presented a “gross and obvious danger” as he handed them fresh sentences to be served on top of their existing ones.

He jailed Parr for life with a minimum term of 32 years, starting today.

Mann was given a life sentence with a minimum of 16 years which will begin when his current sentence expires.

He will have served 40 years behind bars before he can even be considered for release.

Judge Openshaw said both men are likely to die in jail for the “ghastly and gruesome” killing.

“I can’t envisage circumstances in which either of them will ever be released,” he said.

“They will face the fact that they may well end their lives in prison.”

Speaking outside court, detective chief inspector Steve Chapman of Durham Constabulary said: “Mitchell Harrison was a young man who was by all accounts a model prisoner at HMP Frankland.

“Although his family never condoned his past actions, he was still their much loved son and brother and they were supporting him as he served his custodial sentence. His untimely death, and the horrific nature of it, left his family devastated.”

He said the Prisons and Probation Ombudsman is carrying out an independent investigation into the circumstances surrounding the death.

After the hearing, Mitchell Harrison’s family said: “Our lives have been shattered by Mitchell’s horrific murder. His death was cruel and unnecessary.”