A customer entered a restaurant and ate three bowls of soup.  When he got the bill, he insisted that he was overcharged 14 cents a bowl.  The owner insisted that he did not overcharge and the customer went crazy, cutting up the restaurant owner, beheading him and dropping his head in a small trash can in China.

Identified as Mr. Hu, the 22-year-old migrant worker from Sichuan Province downed three bowls of noodles at a restaurant in Wuhan, Hubei, China. After discovering the owner had charged him an extra 14 cents per bowl, which the 42-year-old owner denied.

Hu attacked the man. During the altercation, he grabbed a knife and beheaded the owner, reports the South China Morning Post.

Witnesses nearby watched in horror as Mr. Hu hacked Mr. Yao, the restaurant owner, to death.

Hu dropped the man’s head in a small trashcan outside. 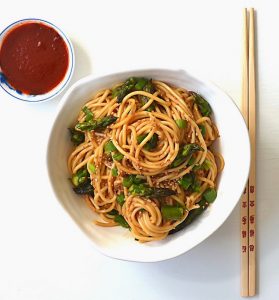 Never lose your head over a bowl of noodles.

The restaurant owner had a 13-year-old son, and his friends called him an honest man who would never intentionally overcharge a customer, reports the Shanghaiist.

The young man, as indicated by his crime, was mentally disturbed. He spent six months in a psychiatric hospital and shocked his family with acts of violence. He even physically assaulted his own parents.

At the psychiatric hospital, Hu was diagnosed with the second-highest level of “mental impairment.”