John F Kelly, the Secretary of the Dept of Homeland Security has announced the hiring of 10,000 immigration enforcement officers as required by an Executive Order issued by President Trump on January 25th in order to quicken the pace of deportations.

Remember during the campaign when Hillary supporting NeverTrumpers tried to tell us President Trump would never keep his promises? Ironically, it was the people pushed by NeverTrumpers that broke every promise they ever made to the American people. Trump is delivering big time in only one short month.

Secretary Kelly ordered the director of ICE to immediately begin the process of hiring 10,000 to effectively enforce the immigration laws in the interior regions of the U.S., according to a DHS memo obtained by Breitbart Texas. In addition, Kelly authorized the agency to hire additional operational and mission support staff, along with legal staff. 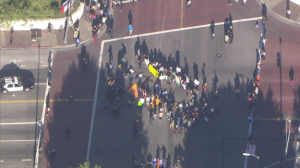 Kelly said the memo implements the Executive Order, “Enhancing Public Safety in the Interior of the United States,” issued by President Trump on January 25.


ICE agents and enforcement officers were used earlier this month to conduct a targeted roundup of criminal aliens in metropolitan areas across the country. Agents and officers arrested more than 600 criminal aliens in 11 states, Breitbart Texas reported. The operation spawned a rash of “fake news” reports, tweets, and other social media comments that sparked unnecessary fear among immigrants not in the sights of the targeted operation.

“I believe ICE is out in public arresting people in order to retaliate against our community for standing up for our values against people like Abbott and Trump,” Austin City Councilman Casar posted on Facebook. “Trump and his allies will do everything they can to divide Americans, invoke fear in vulnerable neighborhoods, and demonize an entire community of people.”

“Of those [680 aliens] arrested, approximately 75 percent were criminal aliens, convicted of crimes including, but not limited to, homicide, aggravated sexual abuse, sexual assault of a minor, lewd and lascivious acts with a child, indecent liberties with a minor, drug trafficking, battery, assault, DUI and weapons charges,” Secretary Kelly wrote in a statement obtained by Breitbart Texas.