I don’t know if any of you remember it but George Takei was on the Celebrity Apprentice and quite frankly he sucked.  Donald Trump fired him.  After that Takei had nothing bad to say about him until he became president saw it as an opportunity to become relevant once again.  He sucked at that, too.

George Takei who is known for his role on Star Trek has publicly attacked President Trump over his foreign policy, specifically the travel ban. What’s strange is that Takei was okay with Donald Trump until he became President. He even appeared on The Apprentice in 2012.

George Takei has viciously attacked President Trump on his Twitter account. Here are a few of his tweets blasting the President. Of course he’s obsessed with Russia like every other delusional leftist. He also criticized the travel ban and stuck up for Muslims. Perhaps Takei should take a trip to one of those 7 countries on the travel ban to see how welcoming they are about his homosexuality… 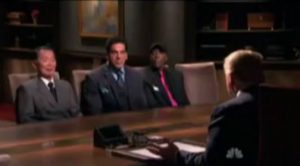 Here are some of Takei’s childlike tweets:

This better be the last reality-TV star, pussy grabbing, blathering idiot of a Russian puppet we ever elect. Cuz I’m not doing this again.


If the GOP refuses to investigate the Trump campaign’s ties to Russian intelligence, we must refuse to let them govern. This is a crisis.

It’s starting to look, swim and quack like a duck. A treasonous Russian duck. https://t.co/PjKHnZstas

Trump wants us all to roll over. But to his racist, xenophobic, and yes, TERRORISTIC policies and orders, we say NO. #NoBan #NoWall #NoRaids

Trump wants us all to roll over. But to his racist, xenophobic, and yes, TERRORISTIC policies and orders, we say NO. #NoBan #NoWall #NoRaids

Here is the hilarious moment Trump tossed twinkie boy out on his ear:

Next John F Kelly to ICE: Head 'Em Up, Move Them Out, Rawhide