It was bad enough that the Day Without Immigrants was a total flop, now many of the demonstrators are paying a yuge price as they are being told they no longer have jobs. And as unbelievable as it seems, these people call it unfair even the ones who were warned prior to taking the day off that would be the result.

“A Day Without Immigrants,” protest was supposed to show people how bad things would be without them in the workforce. But at the end of the day, no one really noticed. But some good will come out of it. Several of the jobs lost can now be taken by Americans, especially young Black Americans who suffered the most under 8 years of Obama.

Bradley Coatings, Incorporated, located in Tennessee dumped 18 employees who failed to show up for work. One of the terminated employees said this:

“I would tell him he was unfair, after working for them for so many years, gave him our best. They could not understand that it was just one day. We were going to make up that day on a Sunday, but they didn’t understand that, and it was not the best way. They didn’t give us an opportunity and just told us we were fired.” 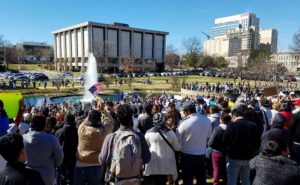 The lawyer for Bradley Coatings released the following statement:

“This past Wednesday night, certain employees of BCI informed their leadership that they would not be at work the following day. Because of the time-sensitive nature of the jobs these employees were assigned to, all employees were told that they would need to show up for work or they would be terminated … Regretfully, and consistent with its prior communication to all its employees, BCI had no choice but to terminate these individuals.”

A few states away, in Florida, a daycare was forced to close after so many employees failed to show up for work.

Brenda Botello told a NBC2 reporter that two employees of Grace Community School were fired Friday morning, so she and three others quit because they felt their termination looming. Botello described herself as “Mexican” and said:

However, it’s unclear if the employees were fired or not. Reverend Jeremy Walker who runs the school said in an email that no one was fired, although parents of the school claim they were told employees no longer had their jobs.

In Denver, JVS Masonry fired at least 30 of its employees who failed to show up for work. Ray, a foreman of two crews, read a text he received from his boss to Fox31:

“You stand for what you believe, make sure you stand for whatever consequences are going to come … He said whoever took the day off today can find another job tomorrow.”

While he claimed the employees were fired for “standing up for families,” Jim Serowski, the owner, said it wasn’t about politics, it was about the fact that he has a “business to run.” He told Fox31:

“If they want a job, they show up when they are supposed to.”

I guess some businesses figure they can do without immigrants.