Joy Reid shut down a guest, J.D. Hayworth after he said that Elizabeth Warren is not an Indian. I guess she considers that fake news, after all Warren does have high cheekbones. Of course Reid had no problem throwing false accusations and misleading accusations at Hayworth. But when he pointed out the fact that she is a hypocrite, he was promptly kicked off the show.

Hayworth then began to complain about the pattern of liberals trying to insert race into political discussions, and started to cite Massachusetts Senator Elizabeth Warren’s recent accusations of racism against Attorney General Jeff Sessions. Hayworth: “But I understand, well, I’ll tell you, we’ll take it out of — we’ll take it our of the ethnicity, although that’s tough when you take a look at the stunt that Elizabeth Warren pulled, and we know that she falsely claimed to be American-Indian-” 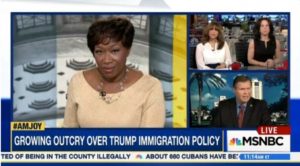 After Reid injected, “What does Elizabeth Warren have to do with anything?” Hayworth continued: “Well, because it’s another stunt in the Senate to set up aggrieved class-“

Wait a minute, okay, J.D., can I just tell you something? We’re going to end here, but, sir, sir, sir, you’ve talked about strawmen, but twice now you’ve answered questions with non sequiturs that have some sort of an ethnic base to them. Now, you’ve gone after Elizabeth Warren’s Native-American heritage, which is a complete non sequitur.


I think we’re done with this segment because you literally answered a non sequitur that’s incredibly offensive. I’m going to let Rosie Perez talk about the — thank you for being here. No, you know what, what an odd exchange. Odd non sequiturs. I want to talk to you for a second, Rosie Perez. Thank you. Wow.

The truth turns out to be liberal kryptonite.