On Tuesday night, James O’Keefe of project veritas appeared on the Sean Hannity Show(radio)  and revealed that he had hundreds of hours of video on fake news CNN.  Well, he didn’t say those words but he definitely implied it very heavily.  The mole will have to quit now because it will be ridiculously easy to out him or her.  (I mean how many conservatives could they possibly have working there?)

O’Keefe: In the next 48 hours, Project Veritas, like Wikileaks, will be releasing hundreds of hours of tape from within the establishment media. Our next target is in fact, the media.

Hannity: How long have you been working on this?

O’Keefe: We’ve had people on the inside come to us. Just like Julian Assange has people come to him, we’ve had people, sources come to us and give us information, and we’re going to be releasing it “Wikileaks Style” this week.
Hannity: Can you give us a hint what organizations are going to be impacted by this?

O’Keefe: It’s one that Trump has really been talking about, you can probably use your imagination. 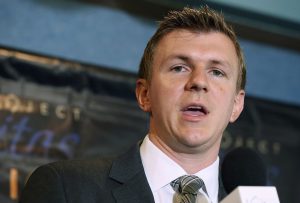 Here is the audio of that radio show: