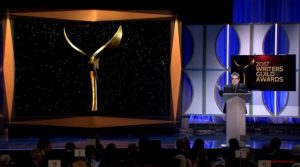 James Woods, an outspoken conservative actor, interrupted Patton Oswalt’s monologue at the Writers Guild Awards once he started criticizing President Trump. He took Oswalt’s shoe to highlight the comedian’s lack of style at a Hollywood awards show! The whole moment was hilarious, and we dare say bipartisan.

Woods is an outspoken conservative actor in Hollywood. He’s already made a name for himself, so he has no need to be afraid of expressing his conservative beliefs. He has a Twitter following a nearly 600 thousand.