While many businesses have come out to blast President Trump, Under Armour CEO Kevin Plank decided to do things differently.

Plank, who launched Under Armour in his grandmother’s basement, made it public that he was happy to have a president as pro-business as Trump.

The Under Armour CEO said, in part:

“To have such a pro-business President is something that is a real asset for the country. People can really grab that opportunity. He loves to build I don’t think there’s any surprises here. When you look at the president he wants to build things.

As a result of his positive comments, Plank has faced backlash, as well as support.

Hollywood superstar and legendary wrestler Dwayne Johnson, also known as “The Rock,” weighed in on Plank’s choice in a Facebook post: 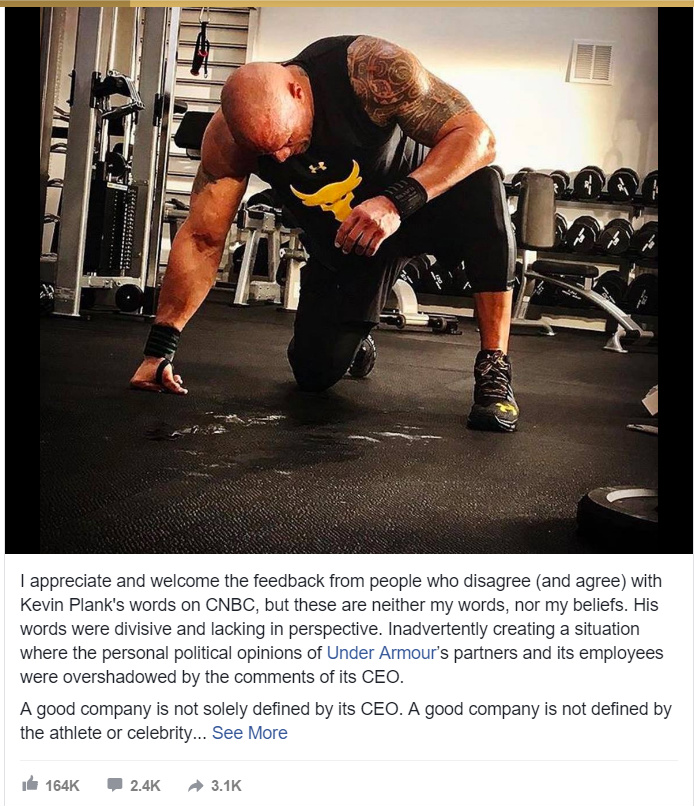 “I appreciate and welcome the feedback from people who disagree (and agree) with Kevin Plank’s words on CNBC, but these are neither my words, nor my beliefs. His words were divisive and lacking in perspective. Inadvertently creating a situation where the personal political opinions of Under Armour’s partners and its employees were overshadowed by the comments of its CEO.

We don’t partner with a brand casually. I partner with brands I trust and with people who share my same values. That means a commitment to diversity, inclusion, community, open-mindedness and some serious hard work. But it doesn’t mean that I or my team will always agree with the opinion of everyone who works there, including its executives.