Two brothers from Tennessee provided graphic details in court on Tuesday describing what one called a long history of abuse by their stepmother, Jessica Cox.

Austin McIntosh explained that his step-mom would handcuff him and his younger brother to the kitchen cabinet, starving them for days at a time and often forcing them to stand handcuffed for a week at a time.  When the brothers tried to eat, they testified that Cox would punish them, even forcing him to eat cockroaches. He described several times Cox beat him with a rubber mallet, a rolling pin, and even a can opener. He testified how his stepmother once pulled down his pants and burned the tip of his penis with a cigarette.

The brothers planned their escape while both parents were sleeping after a night out with friends. They had managed to get out of the trailer truck and went straight to Farragut High School, where Austin McIntosh was a student. A custodian who was outside the school saw the struggling brothers, offered them a pop-tart and called the authorities. 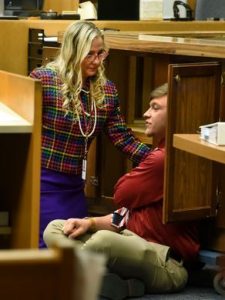 “They don’t want to go home,” Huff told a dispatcher. “They want to be somewhere safe. That’s why they came here.”


Cox is standing trial on charges including aggravated child abuse that were sometimes carried out by the boy’s father, Michael McIntosh. An ex-cop, Michael McIntosh initially backed Cox but, after winding up charged himself, has since struck a deal to testify against her. Defense attorney Rhonda Lee contends her husband was the abuser.

Next Mother Mauled By Pitbull As She Tried To Murder Her Two Sons, “ I had to drown my babies.”