As a married woman now known as Kejsarin Chaichalermphol, she is focused on Buddhist ideals.

These are the philosophies that helped her find a financially well-endowed man who is old enough to be her father.

Other than receiving kindness from my husband from his monthly payments, he has also been giving me extra money, too,’ she told the UK South West News Service.

‘No matter how much he withdraws from the bank, he splits it with me 50/50.

‘Prayers and meditation get you a good husband.’ 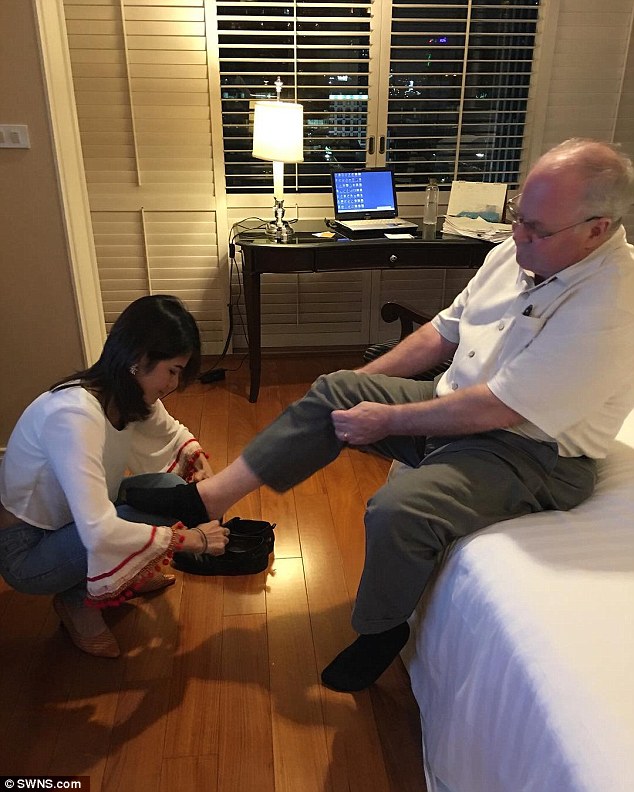 She stirred controversy in the 2000s by appearing in black market videos that were distributed throughout Thailand, including Tokyo Hunter and Asian Heart.

The Asian beauty was prosecuted for appearing in the productions, which breach Thailand’s anti-pornography laws.

She quit the industry, became a devout Buddhist and married Mr Nesland in 2012.

Mr Nesland, who was married previously, made his fortune as an architect near Seattle, following the career path of his late father Harold Jennings Nesland Sr.

‘I used to be a Christian but I’ve been a Buddhist since I was about 21 years old,’ she said.

‘I visit the temple, study and have to look after my family. All my time’s taken up with donations, praying and meditating.

‘Buddhism changed my mind a lot, it changed the way I lived my life. I’m a lot happier now.’

Karma moves in mysterious ways, however, with an image on Instagram showing her husband in hospital being treated for the flu.

‘Old people do not recover as fast as young people,’ she wrote on Instagram.