The driver of a Maserati was going an estimated 144 m.p.h. in January when the Italian luxury car slammed into the rear of another vehicle on Square Lake Road in Bloomfield Township, killing a 53-year-old mother of three, according to newly released police reports.

Gregory Allen Belkin had gotten out of his burning Maserati and was laughing as he ran around the other driver’s car, according to Bloomfield Township Police Officer Scott Schuknecht, the first officer on the scene.

“Gregory said he was the driver of the Maserati several times,” Schuknecht wrote in his report. “Gregory said he looked down and looked up while driving, and the vehicle he hit was stopped on the road. I reminded him the other driver was seriously injured and laughing was not appropriate.”

Rhonda T. Williams, 53, who was lifeless in her smashed 2009 Subaru Legacy, was transported to St. Joseph Hospital where she was pronounced dead. She was driving from work to her home in Oakland Township when the crash occurred shortly after 9 p.m.


According to the data downloaded from the Maserati’s event data recorder, Belkin was traveling at approximately 144 m.p.h. seconds before impact. Crash investigators at the scene calculated the Subaru’s speed at approximately 54 m.p.h..

Belkin’s ex-girlfriend, Kimberly Glazer,later told investigators she had recently ended her relationship with Belkin, but that he was not taking it well.

At that point, the call disconnected. 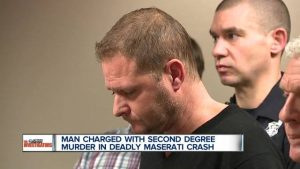 The court found out that Belkin was previously arrested for drunken driving in Virginia. He also said the Coast Guard is investigating an incident in which Belkin appeared to be intoxicated when he showed up for work in December 2016.

He was arraigned on Jan. 27, three days after the crash, on felony charges of second-degree murder and operating under the influence of alcohol — causing death, charges to which he has plead not guilty.