Charity Robinson, a mother in Texas, had no idea that she would come across such a touching moment when she took her son to the rodeo.

Her son is typically shy and has language disorder and sensory processing disorder. When she took a picture of him opening up to another person and posted it on Facebook later on, it inspired thousands of people. In it, she told the story of her son in a way that revealed our connections to each other in ways we might not think of.

“Dear stranger next to us at the rodeo,

You also didn’t know as his mother, I sat in my seat, with tears running down my face, sneaking this photo.” 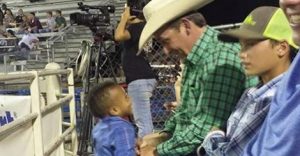 “When we adopted him a few short months ago, we didn’t know how long it would take for him to laugh, play and engage others like this. You didn’t know any of this, but you took time to connect with a child who has had to fight to learn to connect. My heart is full. Thank you.”


Previous After Boyfriend Broke Up With His Stepdaughter, Stepdad Goes On Murderous Rampage [WATCH]