A couple hatched a plan in order to make easy money, but it backfired when their scheme was caught on dash cams from the victims’ cars. 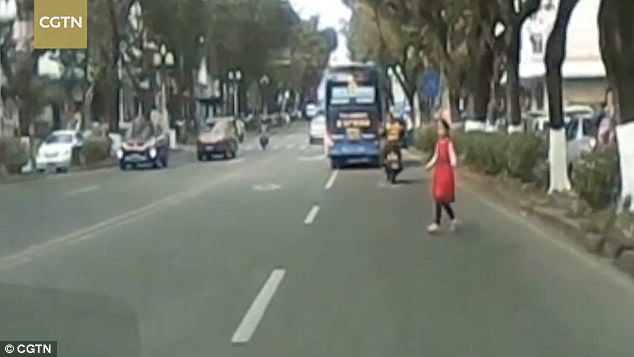 People in China, called police after the man and his wife ordered their 8-year-old daughter to run into the road in front of slow moving vehicles.

During two incidents that were recorded on camera, the girl was seen running in front of the cars and pretending to be hit.

She then lied down on the road and stayed on the ground until her father and stepmother came running “in panic” to pick her up. Her father them carried her to the side.


The couple then demanded compensation from the innocent drivers for the girl’s “injuries.”

The parents were arrested in Guangdong, after one motorist filed a complaint with police. The driver also uploaded the dash cam video to the Internet.

Another driver then came forward, showing his video footage, where the same girl ran in front of a vehicle and being “hit.”

Police believe that the couple has used the girl many times in their scheme to defraud drivers.

While being questioned by police, the girl’s stepmother threw a temper tantrum. In the video below, you can see the woman sitting on top of a counter at the police station while screaming.


Previous TRAGIC: Store Employee Was Shot By Three Teens For Giving Them Pizza With Wrong Toppings

Next Culture Shock: Two Girls Twerk On Top Of Coffin Before Funeral [WATCH]