Ruzanna Shvarts – has been detained and confessed to the killing of Vladislav Saaya, his wife Lilia, both 35 and their two daughters – Darimaa, 6, and Aisel, 4.

The children were downed in a bath tub, and the adults died from knife wounds. Police say the flat was then set ablaze in an attempt to hide the crime. The dead couple’s eldest child, daughter Aiza, 12, was with her grandmother at the time and has been orphaned by the tragedy. 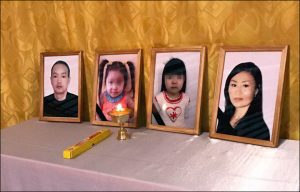 A police source said: ‘Ruzanna was Vladislav’s lover, and she came to visit him with her sister. They drank alcohol. Suddenly Vladislav’s wife Lilia came back home with the children. She started to argue with Ruzanna and this turned into the fight. Melina insists that at this moment she left the flat. And when she came back, it turned that her sister had stabbed Vladislav and Lilia and killed their kids.’ Ruzanna’s statement also implicates her sister, who denies doing more than hiding the crime.

The head of Tuva republic, Sholban Kara-ool, wrote in his Facebook:

‘What a pity that the head of the family failed to save himself and his loved ones. All Tuva mourns these innocent children.‘

He called a day of mourning for the family, who died in their home in Ak-Dovurak.

A multiple murder investigation has been opened. If convicted the women face up to 30 years in jail.