Amy Palmer of York, Pennsylvania, posted the photo on to Facebook showing her husband, Andre Palmer, sleeping under their son AJ’s bed at York Hospital Pediatrics after working an all-night third shift at his job. She snapped the photo after waking from a nearby hospital room chair to find her husband had crawled underneath AJ’s crib.

“This is a picture of a hard working man dedicated to his family!! After working all night third shift, he’s right here with his son who is in the hospital. He’s so tired but he’s here!! Father of the year award goes to Andre Palmer!!! I love you more than words baby”, Amy wrote on her Facebook account 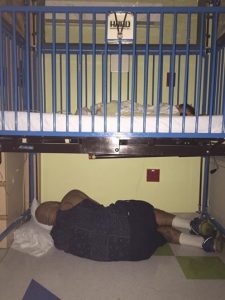 AJ, which is short for Andre Jesse, was being treated after suffering from “an asthma attack I just couldn’t break,” Amy said.

Andre finished his overnight shift at work then took their daughter to daycare before going to their son’s hospital room. Amy was still asleep in the small pull-out chair; not wanting to disturb her, the exhausted man found a pillow and curled up on the hard floor beneath his son’s crib. When Amy awoke and saw her hard-working husband asleep on the floor, she snapped his photo before waking him and moving him to the chair. 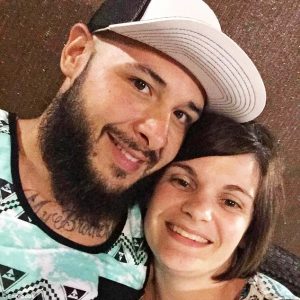 Next Teen Mother Arrested For Physically Abusing Her 3 Month Old Daughter, The Reason Why Is Ridiculous!