Annastazia Merrett said she was hit twice by the driver when she was dropped off in Elephant and Castle. An Uber driver has been suspended after it was alleged that he assaulted the passenger and racially abused her one-year-old daughter.

She said the ‘Asian’ man threw keys in the face of my daughter and referred to her father as a slave. She was left with a black eye following the attack and that she hit him back in ‘self defence’. 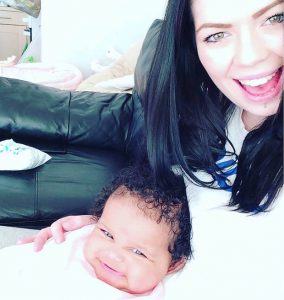 The most horrific thing is that the police just let him get back in the car and drive off to collect his next customer. What if he does worse to someone else?

‘I was trying to get Savannah’s baby seat out of the car and unlock the heavy gate at the same time so I asked him politely for a hand.’

‘When I dropped my keys he picked them up and threw them in my daughter’s face. He called me a “white b*tch” and said Savannah’s dad must be ‘a slave’.

‘What kind of man does that?

‘Like any mother who had seen what had just happened to my daughter I moved towards him and he took a swipe at me.’

Annastazia said, ‘He tried to tell me it wasn’t necessary and I told him it was against the law for her not to use it. My child’s safety is more important than him trying to save time.


‘He kept saying to me “I don’t listen to a woman” and “I tell a woman what to do, not the other way round’. His views were disgusting.

A Metropolitan Police spokesman said: Police were called at 8.21pm on Saturday, March 11, to reports of an assault in Southeast London.

The officers at the scene used their discretion and concluded that there were not enough grounds to arrest either party and a community resolution was agreed by all. The following day the woman attended a south London police station and said she was not happy with the resolution.


Previous AMAZING: New Smart Condom Tracks The Calories You Lose While Having Sex