A pregnant woman who was waiting to get groceries at a supermarket, suddenly went into labor and gave birth on the street, according to a video that was uploaded on the Internet.

The incident, its conclusion caught on video, serves as a stark reminder of the hardships Venezuelans face: standing in food lines for hours for rationed food and forced to handle medical emergencies with few resources. 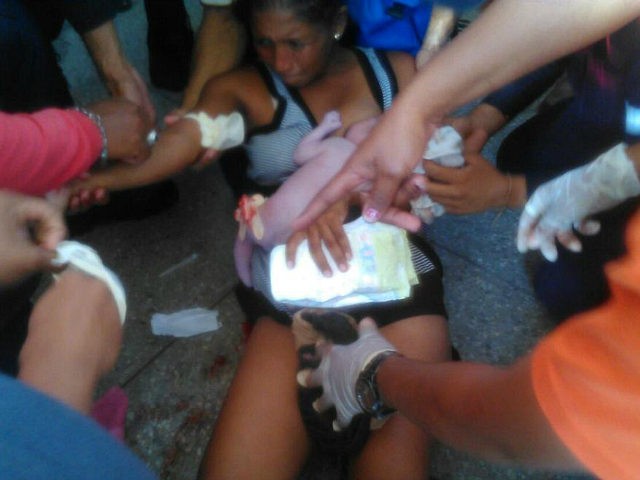 The details of the incident remain unknown, though, thanks to President Nicolás Maduro’s gross economic mismanagement and food rationing system, a Venezuelan can expect to stand in line for five to eight hours to gain entry to a supermarket. Often, whether or not the market still has the items the shopper expects to purchase is a gamble. The distressing situation has fed into a large underground market of goods such as laundry detergent, diapers, and basic food supplies.

The unidentified woman’s struggle surfaced on social media where a citizen activist posted a photo of the woman holding her child while sitting on the blood-stained asphalt.


“That is how this baby came to the world, on the middle of a line in Lahu Supermarket,” anti-government activist Vanessa Flores wrote on Twitter. The incident occurred in the city of Coro, Falcón state.

Video later surfaced on YouTube of the final moments of the woman’s labor as emergency services personnel carried her and the infant away. A crowd of other individuals in the line to enter the supermarket had formed around her to ensure her safety and cheered when she gave birth.

Next MONSTER: Man Stabs Step-daughter Then Sets her On Fire For One VERY Small Reason [WATCH]