Brryan Jackson, now 25, was diagnosed with  AIDS when he was 10 months old as a result of his father injecting an HIV infected blood on him. Doctors even gave him not more than 5 years to live when they found out he was infected with the disease.

Back in 1998, Brian Stewart, a St. Louis hospital technician and Jackson’s biological father, was sentenced to life in prison after allegedly injecting his son with an HIV positive blood which would later develop into a full-blown AIDS.

According to police investigations, Stewart committed to the malicious act in order to avoid paying for child support when he and Jackson’s mother ended their romantic relationship.

“You won’t need to look me up for child support… because your son is not going to live that long,” Stewart told Jackson’s mother, according to court documents. 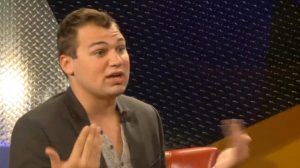 Jackson, now a motivational speaker went through years of recovery and has lost 80 percent of his hearing and suffers from a slight speech impediment, but he has chosen to turn the entire incident into something positive by becoming an AIDS activist.

“Man, either I could be sitting around being so mad at the situation, or I can sit around and have fun with it,” he said in an interview with GQ. “Life’s about having fun, having adventures.”

By the age of 7, Jackson had fevers, a swollen liver, chronic ear infections and fungus growing under his fingernails. The disease, which ravaged his immune system, forced him onto 23 oral medications, according to GQ. Doctors said there was a small chance of him surviving, that he could either die from the disease or from the complication from all the medication he was taking at a very young age.

While Johnson said he prays for his father’s salvation, he has not reached out to him in jail.

“I don’t really feel anything about him,” Jackson said in an interview. “I don’t know what he thinks of what he does, but since I’ve forgiven him, that’s all I can do. Just live my life and show him what I’m made of.”