An young aspiring entrepreneur from Wisconsin bid to make money got her suspended from school after her principal accused her of selling sex toys.

Frances Habeck was suspended for three days from Trinity Lutheran School in Racine, Wisconsin for selling “water snake wigglies.” Yes, everyone, water snake wigglies. The sale of the wigglies, priced at $1 each, was to benefit autistic children. The 12-year-old  who clearly has very good intentions began selling them at the school after reading online they’re good for children with autism.

‘It just calms you when you touch it,’ she said. ‘You squeeze it, it’s cold, and it’s hard to hold sometimes.’, Frances said. But school principal obviously didn’t see it that way when Frances was pulled from a basketball game by the principal, who admonished her in front of her peers. The school’s principal allegedly pulled her out of a basketball game to yell at her for selling what she said were sex toys. Frances went home and told her father, Milt Habeck, that her principal yelled at her. 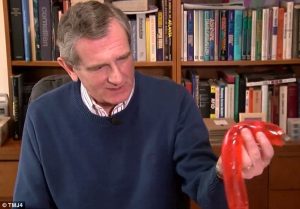 Her dad took the particular issue that the principal made such an accusation. “It’s nuts because she’s an adult,” he said of the principal. “She should know better. She should know that this has nothing to do with sex.” Frances maintains, too, that the toys were innocent.

A product description on Amazon describes water snake wigglies as:

“Great stress relievers because they’re fun to fidget with and hard to hold…You can play with a water wiggly during a break or anytime you need some stress relief. Water Wigglies are an interesting conversation piece too!”

A fact that Frances’s father is well-aware of, insisting the wigglies are nothing more than “bags filled with water,” saying about the school: “The spirituality of that place is busted.” And until Frances’s record is cleared of the suspension, Milt said he won’t stop speaking out on the matter.

Next HORRIBLE! Father Shoots And Kills 7yr Old Daughter Before Shooting Himself At A Parking Lot [WATCH]