Erica Parsons who was first reported missing in 2013 have been found, local authorities announced, CBS News. Parsons was living with her adoptive mother and father when their biological son told police that he had not seen the girl since 2011.

James Parsons, the sibling who reported that the girl had gone missing, testified to court that children in the home were encouraged to abuse the girl. Parsons, who was developmentally delayed and partially deaf, was the target of harsh punishment in the family home near the town of Salisbury.  During James Parsons’ last encounter with his sister, she complained of feeling sick and having trouble breathing.

An FBI agent testified to court that when investigators searched the Parsons’ home back in 2013, they found traces of the girl’s blood and either urine or saliva in a closet in the property.

Authorities were able to find Erica Parsons after her father had led them to the area in where she was buried, a shallow grave in Chesterfield County, South Carolina. Her skull and bones were found not far from where Sandy Parson’s mother resided.

“Everybody involved in this case has children,” Rowan County Sheriff Kevin Auten told reporters. “It touches you. I was there at the grave site when her body was recovered and I’ll tell you there’s some pretty tough officers that had a pretty tough time. It’s worn on all of us,” he said.

Casey and Sandy Parsons, Erica’s adoptive parents, are behind bars after being convicted of tax fraud. The couple continued to cash Erica’s adoption support checks and claim her on their taxes even after she went missing in 2011.

She was laid to rest in a small, white casket covered with pink, purple and white flowers at a public funeral in First Baptist Church of Salisbury that took place one day after her supposedly 19th birthday. 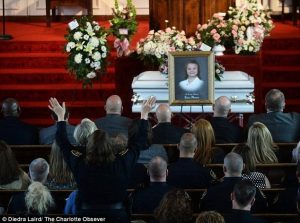 Next Mom Posts Dire Warning After She Notices Strangers Staring At Her Child, Then She Hears “Say Bye to Mommy”