Lima Peru – Torrents of mud rushed through the suburb of Lima, Peru, destroying homes and sweeping away logs, wooden planks and rubble. A cow, dumbfounded and cloaked in sludge, floated amid the debris. 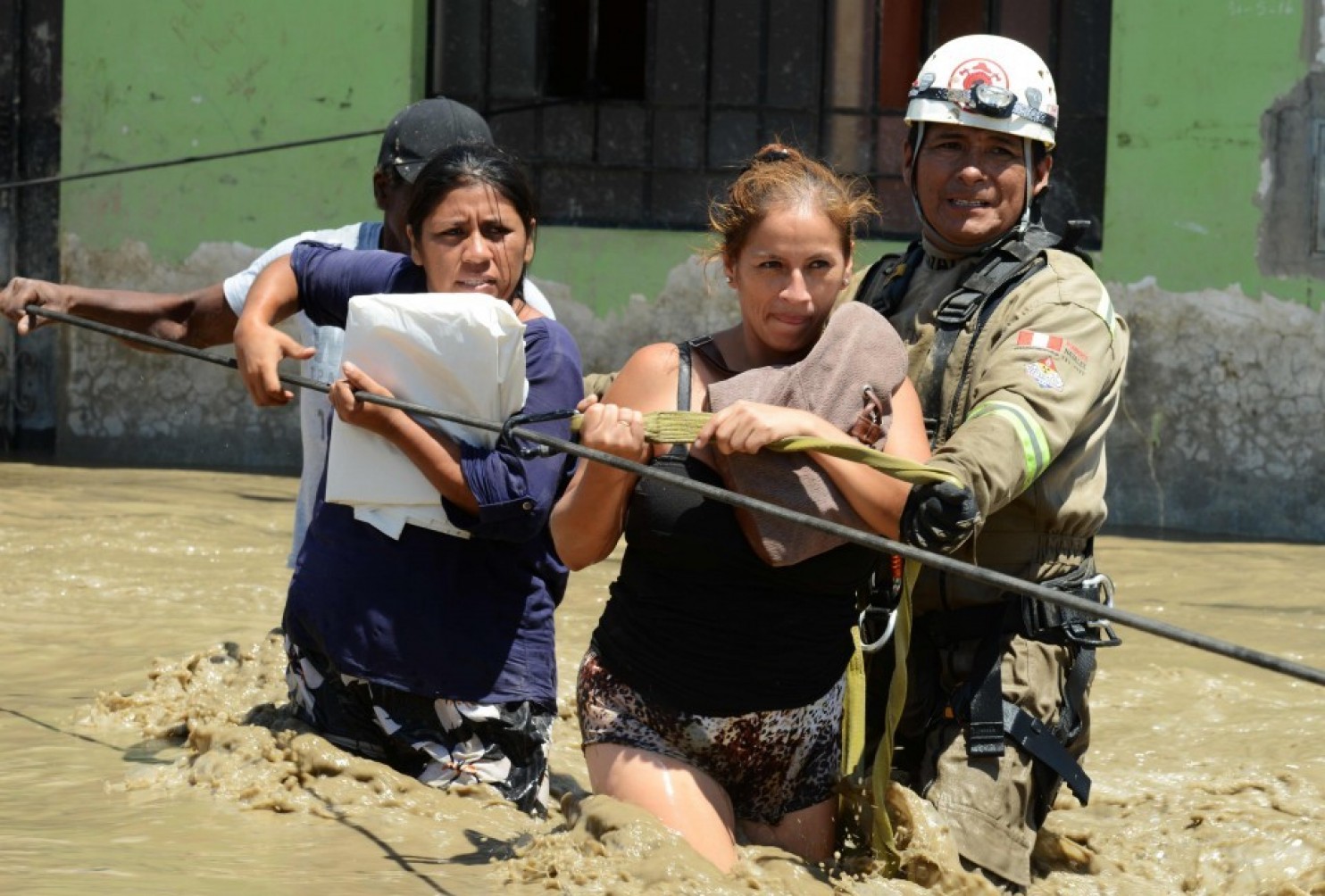 Lima Peru – Torrents of mud rushed through the suburb of Lima, Peru, destroying homes and sweeping away logs, wooden planks and rubble. A cow, dumbfounded and cloaked in sludge, floated amid the debris.

Then, a group of onlookers at the edge of the water spotted something else.


Being carried along in the mudslide was a woman so coated with thick grayish-brown muck that she almost blended into the rubble around her. She clutched onto wooden planks, struggling to raise her head. But as voices called out to her from the river’s edge, she lifted herself up and fought her way out of the sludge and debris, falling multiple times, but always struggling back up.

The dramatic escape was captured on cellphone cameras and soon shared across the Internet.

The woman in the mudslide, a 32-year-old Peruvian mother named Evangelina Chamorro, became a symbol of strength for Peru in the midst of devastating floods that have killed 84 people and left more than 100,000 displaced.

To the local press, she represented the “courage of the Peruvian woman,” the “hope for all of the nation.” To the rest of the world, the woman dramatized a catastrophe in the South American country that had received little international coverage.

She described the horror of that day in a news conference a week later. 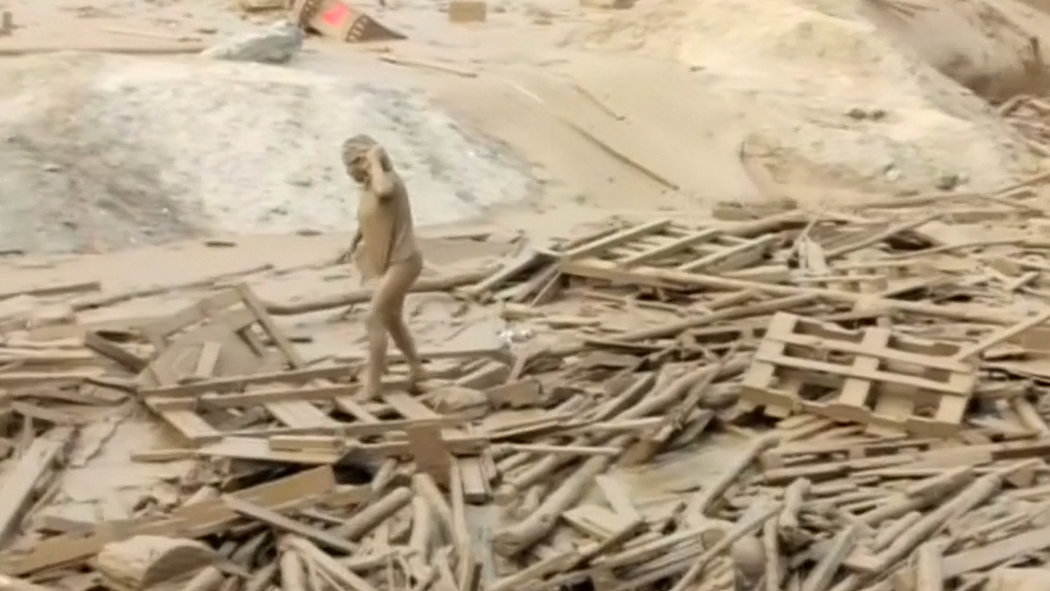 Chamorro had just returned from dropping off her daughters at school on March 15 when she heard the loud sound, she said. She and her husband were feeding their pigs in their home in Punta Hermosa, a suburb of Lima that means “Beautiful Point.”

“What was that?” Chamorro said to her husband. They stepped outside their home and immediately felt the mudslide rushing toward them. Seven of their pigs were swept away.

“Give me your hand, come here,” her husband, Armando Rivera, said. They clutched onto a tree branch together, trying to hold back against the river of mud.

“I can’t anymore” Chamorro said. “Have strength!” he told her.

But the tree branch broke, and Chamorro was overcome. The two were separated. “We have to swim!” Rivera yelled.

The mudslide carried the couple for several blocks until the woman could no longer see her husband. She didn’t know whether he had been rescued or swept under. For half an hour, she called out for help but nobody answered.

The river carried Rivera into a corner, and two men hurried over to help him. Blinded by the muck, he wanted to jump in after her, but his rescuers wouldn’t let him.

Nearly two miles downstream, Chamorro was losing stamina, grasping onto the debris around her in an attempt to stay afloat.

“I didn’t have any more strength, not even to breathe,” she said. ” I was swallowing mud, filling myself with mud.”

She prayed to God for assistance, thinking of her two daughters.

“What will become of their lives without a mother and father?” she asked herself.

Suddenly, a floating trailer blocked a bridge near Chamorro, slowing the flow of the mudslide as it passed under the bridge just enough that she could steady herself and rise up. Rescuers helped her reach the edge of the water. She blacked out after taking two steps, waking up in the ambulance later, she told reporters.

She arrived at the hospital with painful gashes on her legs and abdomen from colliding with debris, and mud all over her body — even in her throat and intestines, said Julio Media, director of the hospital where she was treated.

Hours later, a man would tell Armando that his wife had indeed survived the mudslide, and the family would reunite late that night, the BBC reported. But Chamorro would spend the next week in the hospital, emerging Wednesday almost fully recovered, aside from a few scratches and the lingering psychological shock from the traumatic day.

The family’s home was among the 145,000 destroyed across Peru as a result of the floods, the worst environmental disaster to strike the Andean nation in two decades. In a local El Niño phenomenon, the suddenly warmer Pacific waters off Peru’s coast have led to calamitous downpours in a country that hardly ever sees rain.

About a third of Peruvians — more than 8 million people — live in Lima, a city built on a desert and considered by some experts to be the second driest capital in the world after Cairo. The massive city’s infrastructure and sewage system — or lack thereof — were poorly equipped to withstand the unexpected torrential rain, which has destroyed 5 percent of national roads.

The U.S. government has pledged a half-million dollar donation and is sending seven experts to aid in recovery efforts, the Associated Press reported. Meanwhile, continued rains are forecast for another two weeks, and some fear the worst could still lie ahead.

In parts of Peru, including Lima, school classes have been suspended for at least a week, and running water has been restricted after treatment plants were clogged with debris from mudslides. Plastic tents have been set up on the outskirts of Lima for the displaced. Many of the more affluent neighborhoods in Lima have been left unscathed by the floods, while the poorest neighborhoods, often built along cheap land near rivers, have been the hardest hit.

Chamorro and her family are staying with Rivera’s brother. They have been unable to recover much of what was lost in the mudslide — their belongings, their animals and money they had saved for their daughters’ school fees.

While they rebuild their livelihood, their municipality stepped in to help and local officials reunited the family with two of the pigs they thought they had lost that day.

One is about to give birth.

Next Parents So Abusive, Their 4yr Old Daughter Thought Her Name Was 'IDIOT'