Fayetteville police responded to Cape Fear Valley Medical Center about an unresponsive child. The attending medical personnel had discovered bruises covering Macy’s body and determined that she had suffered many life-threatening injuries that appeared to be the result of child abuse, police reports says.

The 2yo was transported to UNC Hospital at Chapel Hill, about 70 miles away but unfortunately died from her injuries 2 days later.

According to court documents, the mother, Ditty, told police that her daughter was ill, so she called Keefer, who is a paramedic. Not long after Keefer arrived, the pair told police, they noticed that Macy was choking on her own vomit and they called 911 to get professional assistance.

The medical examiner ruled Macy’s death a homicide making Ditty and Keefer charged in her slaying.

Ditty is a female soldier in the 525th Military Intelligence Brigade based at Fort Bragg, serving as a chemical, biological, radiological and nuclear specialist, said Army spokeswoman Maj. Heather Hall. While Keefer also served in the military for 12 years, according to the Fayetteville Observer.

Exactly a month after Macy’s death, Ditty went to Pennsylvania photographer Sunny Jo and asked for images to be edited in memory of her daughter. It was her reading, walking and sitting with her daughter at the graveyard. Jo agreed, as he first thought he was helping a grieving mother, and has completed hundreds of similar requests in the past as part of his One More Time series.

When he asked Ditty how the girl died, she said the 2yo had choked on a banana when she had a stomach ache. He also decided not to charge Ditty because of the tragic incident and didn’t want to charge a grieving mother. 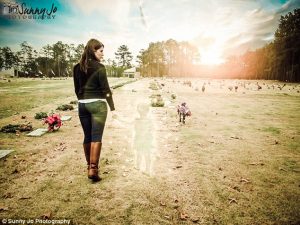 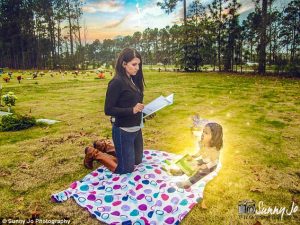 But he later found out that the couple was arrested, when a police detective reached out to him to relay the news. Ditty, the detective said, had used Jo to make it appear that she was a mother in mourning.

“The only thing that allows me to sleep at night is knowing that I didn’t do this for Jeanie,” he said. “I did it for Macy.”