Joshua Hill, 36, was sentenced to hold up homemade sign reading ‘This is the face of domestic abuse’ outside the courthouse. Hill had pleaded guilty to assault and criminal trespassing in 2014 instead of going to jail.

According to reports, Hill allegedly admitted to violating a parole condition stating that he should not have contact with the victim from the assault case. Hill had told the local media that he did not in any way assault woman, but he only pleaded guilty in the original case because he had hoped it would help him be released from jail. 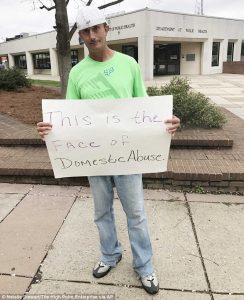 ‘The idea is that if we shame you, and you feel embarrassed, then maybe you won’t do this again,’ Lawrence McSwain, a retired North Carolina Judge who is unconnected with the case.

But Hill on the other hand has a different view with regards to the punishment since he had become the new ‘poster boy’ for domestic violence and says he’d rather be in jail than publicly humiliated.


‘This is belittling,’ said Hill, ‘People say, “I can’t believe they’re making you do this”,’ he said. ‘And other people kind of shake their heads, look at me like I’m a bad person or ask me why I’m doing this.’


Previous 15yo Kills Herself While Playing Russian Roulette