Kevin Duke recently bought a used car for his daughter Jada, however he found an unexpected surprise in the glovebox from Sabrina Archey, the daughter of the car’s previous owner. 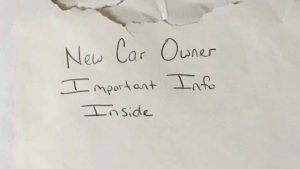 Upon finding the letter, Duke explained what happened next to a Facebook page named Love What Matters.

“I bought my daughter, Jada, a used car a couple weeks ago. Since she doesn’t turn 16 until March, I’m driving it to see if there are any kinks to work out before I give it to her. Well, yesterday I’m in it tinkering around and I open this storage compartment on top of the dash (which I’ve opened a half dozen times already). This time I notice a rubber mat in the bottom of it and for whatever reason, I pull it out. To my surprise, I find this envelope with this letter inside. I won’t lie, I shed a few tears.”

The letter, signed by Sabrina Archey, reads in part,

“To the person that gets this car, I just wanted to let you know what a special vehicle you’ve bought. This car belonged to my mum. She passed away Feb 25, 2015, in a house fire along with my 6 year old daughter and my aunt. The last time my mum drove this car was the day she left us. Her and my daughter went out shopping and got their haircut. Love, joy, and adventure was had in this car. So now that it’s yours, please remember it isn’t just a car. It’s a memory. This car, with all its quirks, is the last piece of my family. Be nice to it. Play it a country song, “Big Green Tractor” was my daughter’s favorite sound ever or some Lynyrd Skynyrd’s “Freebird.” That song meant so much that I played it at their funerals.”She continued, “You’re riding with angels. My angels. Talk to them if you like, I’m sure they’d like to see and hear about any new adventure you take in this car,

Moved by the letter, Duke shared the story with Love What Matters on February 3. The post has gained over 19,000 reactions and over 3,000 shares as of February 9. in addition, the post garnered over 600 comments — including one from Sabrina Archey herself.

They had since then raised money to get Jada a new car for Archey to get her mother’s car back as her special remembrance.

Next 5yo Boy Picks Up Pistol And Starts Shooting It [VIDEO]