A brilliant response from a 16-year-old girl to a request of her nude picture makes noise in social media when she posted the screenshots on Tumblr and garnered 81,438 notes. The caption read, “They don’t give up so easily nowadays.”.

Jacquie Ross of North Carolina, was texting her friend, Michael, when the conversation took a turn for the worse. Michael’s attempts in asking to text him a picture of her outfit turned out a failure in luck. A conversation that circled around showing each other prom outfits went awry, and that Jacquie was hella funny. 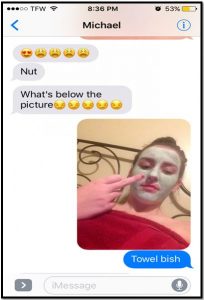 In an interview in BuzzFeed News, Ross told that Michael is on prom committee with her and they were discussing outfits. She said that she had sent him a picture of her dress and then he wanted to see the full outfit, but she had just gotten out of the shower.

“I told him I wasn’t fit for pictures of the whole outfit at the moment,” she said. “He asked why, and I sent him a picture of the face mask, not even considering how you could see my shoulders.”


After Jacquie sent the first picture, Michael then asked her “what’s below the picture,”

At this point Jacquie did not attempt to hold back. She sent Michael a photo of herself in her towel, showing him her middle finger. She texted, “Towel bish.” But Michael still did not back down.

Then Michael asked what was under the towel. Turns out it was…ANOTHER TOWEL!

Even with the seemingly never-ending trail of towels, Michael still wanted to know what was under the towels. “You’re putting on more towels,” he wrote.

Despite the odds, Michael commenced forth with his mission. And Jacquie was still not having it. Then Michael asked Ross to take off all the towels and send a picture.

Jacquie did just that– but now she was wearing a robe. Michael tried another time and told her to open her robe, and asked her to take off every single article of clothing. Jacquie did, revealing a towel. In her last text to him she sent a plain black photo, claiming she was actually nude in a dark room.


Previous Caregiver Left 92yo With A Note, Wife Immediately Call The Police