A Utah couple credited divine intervention with their diabetic alert dog being able to sense their daughter’s blood sugar dropping from five miles away.

Sadie, a 4-year-old with diabetes and Down Syndrome, once relied on her parents to keep her blood sugar levels stable. That is until they brought home a special Labrador named Hero to help her.

Hero, a trained diabetic alert dog, can sense via smell when Sadie’s blood sugars are too high or low. The dog then alerts the girl’s parents.

Sadie was in class at Deerfield Elementary School in Cedar Hills one day, while Hero was five miles away at the family’s home. Suddenly, the dog began to act out.

“He’s normally a very quiet dog,” Michelle said. “Whining is not in his protocol. But he just started whining and he would not stop.”

As it turned out, Hero was alerting Michelle that her daughter’s blood sugar levels were low. The mother notified her teacher out of precaution.

“[Sadie’s mom] called me and asked if I could check her numbers and they were fine,” Stoneman explained. “I tested her and it was fine. Then within half an hour, she went down.”

Sadie’s numbers dropped quickly from 122 to 82.

“The lows are more dangerous immediately,” Michelle said. “[With] lows, she could go into a diabetic coma right away, and she could die, if we kept her low too long.” 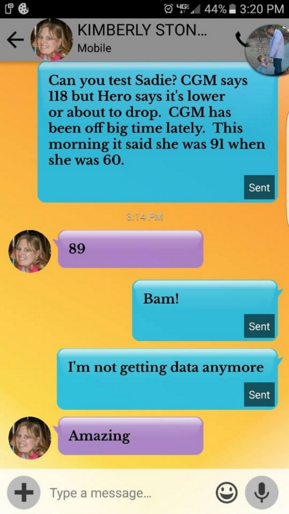 School principal Caroline Knadler, also diabetic, said she couldn’t believe how quickly things escalated and how many heroes lived up to his name.

“I’ll be honest, it kinda blew my mind,” Knadler said, adding that Hero once alerted her of her own sugar levels dropping during a parent-teacher meeting. “We’re here and the dog is way over in Pleasant Grove. How can it be based on smell? It really got me thinking. What is Hero alerting on?”

“They’re easy to train, they’re bred for their nose,” Owens said. “These dogs can wake up a parent in the middle of the night for a low. They can go get help, and they do this well in advance of all the technology.”

Owens added that Labradors have hundreds of millions of scent receptors that allow them to smell from up to two miles away. She believes something else helped Hero that day.

“How do dogs know when their owners are coming home?” Owens said. “There’s another piece of it that I call, ‘God only knows.'”

Sadie’s father said he believes it was divine intervention that assisted Hero in his ability to help his daughter.

“I can’t explain it. It’s a God thing,” he said. “I think it’s like mother’s intuition. These dogs have abilities and senses beyond our understanding. That’s why we’re thankful to have Hero, he’s the one who saves her more times than not. I’ve always called Sadie our little angel, and I think Hero was a little angel sent into our lives to watch over her.”


Previous A Man Filmed Heaven For 7 Days. What He Captured Took Our Breath Away [WATCH]