Salma Hayek an actress exposed that she declines to date Donald Trump, he established a false story about her in the National Enquirer. 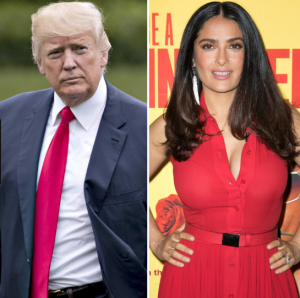 According to BuzzFeed News. US President Donald Trump pursued her when she had a boyfriend. He planted a story in the National Enquirer about her being too short for him, after being rejected.

“When I met that man, I had a boyfriend, and he tried to become his friend to get my home telephone number,” Hayek said, adding that she met Trump early in her career before she was famous. “He got my number and he would call me to invite me out.”

“When I told him I wouldn’t go out with him even if I didn’t have a boyfriend, [which he took as disrespectful], he called — well, he wouldn’t say he called, but someone told the National Enquirer,” she added.

Trump called her after the story ran to influence her to go out with him.

“Later, he called and left me a message. ‘Can you believe this? Who would say this? I don’t want people to think this about you,’” Hayek said. “He thought that I would try to go out with him so people wouldn’t think that’s why he wouldn’t go out with me.”

According to CBS, Jessica Drake an adult film claims to be a victim of unwanted sexual advances by US President Donald Trump after an encounter with him in Lake Tahoe, Nevada 10 years ago. 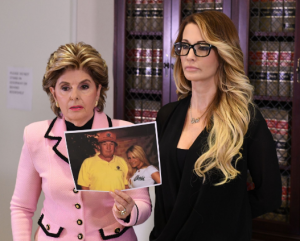 She said: “He flirted with me and invited me to walk along the golf course with him.”

Drake was invited by Trump in his room after she got her phone number, she was with her two friends with they went in his room.

When they reached Trump’s hotel room, she claims that Trump kissed and hugged each of them without their consent. A security guard was inside the room when they are at Trump’s room. After  30 to 45 minutes, they all leave the room. Drake then received a call from Trump, asking her to come back.

“I indicated that I did not wish to return,” she said. “Then Donald called. He asked me to return to his suite and have dinner with him. He also invited me to a party. I declined. Donald then asked me, ‘What do you want? How much?’”

Drake refused to join Trump and received an offer of $10,000.

“I declined again and once more gave as an excuse that I had to return to Los Angeles for work,” she said. “I was then told Mr. Trump would allow me the use of his private jet if only I accepted his invitation.”

Drake, who said she is a sex education advocate and did not tell this story for fame.

“This is not acceptable behavior for anyone — much less a presidential candidate,” she said. “I am not looking for monetary compensation. I do not need additional fame … I understand that I may be called a liar or an opportunist but I will risk that in order to stand in solidarity with women who share similar accounts.”

Trump denies the accusation and he threatened to take legal action towards all the women who accuse him of sexual misconduct.

“Every woman lied when they came forward to hurt my campaign,” Trump said in an Oct. 22 Gettysburg, Pennsylvania, speech. “Total fabrication. The events never happened. Never. All of these liars will be sued after the election is over.”