On October 12, the space rock called asteroid 2012 TC4, is about 30-100 feet in size will fly at just one-eighth of the distance between Earth and the moon. In October 2012, this has passed our planet at about double the distance of its next anticipated pass.

Scientist assures that it will pass safely after tracking it down last month. With this close encounter, NASA will have the chance to test its network of observatories for the planetary defense system, if an asteroid landed on Earth.

A scientist working on the NASA TC4 observation campaign Dr. Michael Kelley said: ‘Scientists have always appreciated knowing when an asteroid will make a close approach to and safely pass the Earth because they can make preparations to collect data to characterize and learn as much as possible about it. This time we are adding another layer of effort, using this asteroid flyby to test the worldwide asteroid detection and tracking network, assessing our capability to work together in response to finding a potential real asteroid threat.’

A very large telescope of European Southern Observatory in Chile was used by ESA scientists tracked the space rock. The scientist did not know the distance of the asteroid would but they are expecting it to return for a near-Earth engagement this year. 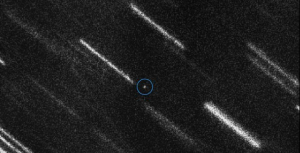 They discovered that 2012 TC4 will pass within one-eighth of the moon’s distance from the planet after the observation made on July 27, 31 and August 5.

Rolf Densing head of European Space Operations Centre in Darmstadt, Germany said: ‘It’s damn close. The farthest satellites are 36,000 kilometres (22,400 miles) out, so this is indeed a close miss,’ he told AFP. As close as it is right now, I think this prediction is pretty safe, meaning that it will miss.’

At the time of the observation, the asteroid was still very far Earth about 35 million miles. Around 30,000 mph is its traveling at speed.

It is believed that if an asteroid hit the Earth it will make a devastating impact. However, NASA assured that the asteroid will not hit the Earth despite the close encounter event.

Although at much further distance, the asteroids next close approach to Earth will happen on December 29, 2019, according to Nasa’s Jet Propulsion Laboratory.

Next Will The Popular 'SLIDE FIRE' Rapid Fire System Be Banned?